Insurance marketers have flooded the airwaves with characters and mascots in recent years, but the critter that started it all—Geico’s gecko—still reigns supreme with viewers, according to a new Ad Age-Harris Poll, which finds that 40% of the respondents “strongly like” the lizard, while an additional 35% “somewhat like him.” That amounts to a 75% favorability rating—which shows that viewers are not yet tired of the 23-year-old character that is backed by Geico’s hefty ad budget. Coming in second is Jake from State Farm, who notched a 69% favorability rating. (Scroll down for the full ranking.)

The good news for all insurers using mascots—and most of them are—is that viewers seem to like them all. The poll sought opinions on nine characters (including one duo: Liberty Mutual’s LiMu Emu and Doug) and all of them achieved favorability ratings above 50%. Landing in last place was Progressive’s “Jamie” at 52%; the more well-known “Flo” scored 66%.

Geico first cracked the code in 2019 when the gecko, created by The Martin Agency, proved that silly ads are effective in selling a serious product. According to the poll, one reason they work is that they make intangible insurance products more tangible: 48% of poll respondents said mascots make it easier to relate to insurance brands, while only 34% said the same thing about real-life celebrity backers.

Allstate seemed to recognize this relatability factor when it opted to bring back its Mayhem character earlier this month after he was sidelined for more than a year. He serves to personify disasters that insurance is meant to protect against. Nearly half of all poll respondents (48%) applauded his return, while 41% were neutral. He plays particularly well with older millennials, according to the poll, which found that 65% in that demographic cheered his return.

Below, how the characters rank by favorability and awareness, along with some other quick facts about the hardest-working fictional insurance sellers in the biz. 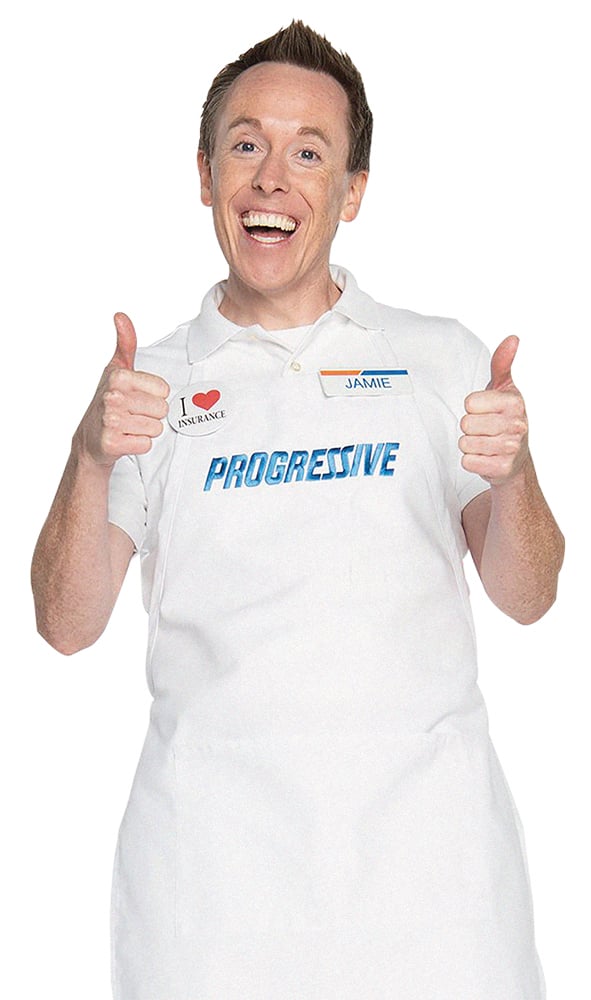 Bio: Originally Flo’s sidekick, Jamie has taken on more of a featured role in ads of late, including one new ad called “Primetime,” in which he fantasizes about being a megastar. In 2020, he fronted a campaign for Progressive’s “Turkey Protection Plan,” a joint venture with Whole Foods that offered a gift card in the event of a cooking fail. The actor behind the character is Jim Cashman, who has appeared on TV shows including “The Goldbergs” and “It’s Always Sunny in Philadelphia.”
Key stat: Cashman has four writer credits on IMDB, including for “Saturday Night Live.”
Strength: Is a rising ad star.
Weakness: He’ll always be stuck in Flo’s shadow.
In real life would most likely…
Be a sycophantic executive assistant. 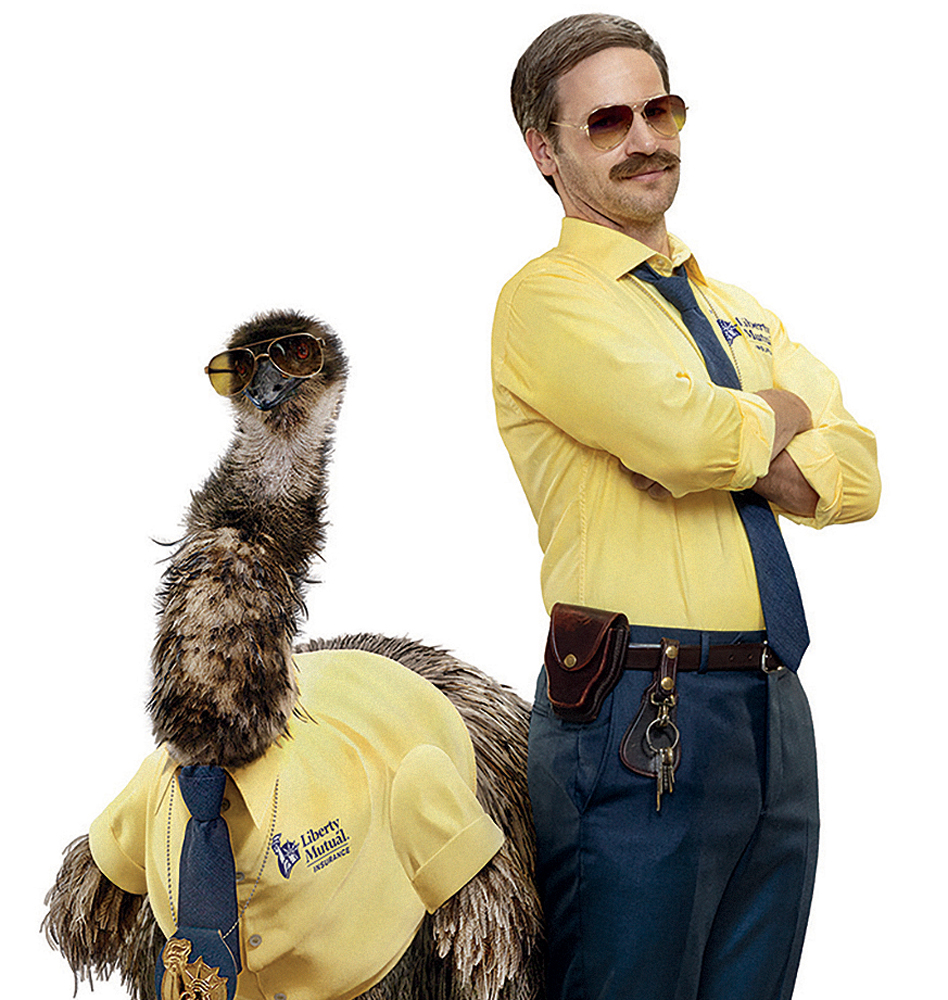 Bios: The yellow-shirted duo was introduced three years ago as a modern-day Turner and Hooch with an insurance spin. The mustached Doug and his emu partner LiMu are driven by a need to save customers from “overpaying for one-size-fits-all insurance,” according to Liberty Mutual. However, while the ads give the partners their own ’70s-style theme song, spots still conclude with the brand’s earworm jingle “Liberty, Liberty, Liberty.”
Key stat: Liberty Mutual films with three different emus, according to actor David Hoffman, who plays Doug. “One who specializes in standing still, one who runs … we kind of change them out,” he recently told the New York Post, noting that most of the time a piece of tape represents LiMu during filming and is swapped out post-production with CGI.
Strength: Their yellow shirts help with brand awareness.
Weakness: The emu could be a liability.
In real life would most likely …
Be a detective and his sidekick (unclear who plays whom).

Bio: The character, a life coach played by actor Bill Glass, continued Progressive’s “parentamorphisis” campaign of consumers trying to avoid becoming their parents at a time when consumers needed his humor the most—the pandemic lockdowns. Tough love advice like “Guess what, the waiter doesn’t need to know your name” helped Progressive stand out in the competitive insurance landscape. “Back then it was a very unpopular decision,” Jeff Charney, Progressive’s then-chief marketing officer, told Ad Age in 2021. “Everybody else was doing all this heavier stuff, wearing masks, the ICU, ambulances, and we were introducing this kind of funny guy named Dr.—people got nervous.” Yet Dr. Rick resonated enough with customers to earn him his own book deal late last year.
Key stat: Progressive’s in-house publishing division Eleven Letter Press recently published 5,000 copies of Dr. Rick’s new book, which is 119 pages long and can serve as a “touchstone” for customers, according to Glass, speaking in character as Dr. Rick.
Strength: His trademark dry humor resonates with many.
Weakness: Wears turtlenecks.
In real life would most likely …
Be a therapist.

Bio: Created as a funny take on the insurer’s name, the duck and the brand are nearly inseparable—a fact Aflac acknowledged in 2005 when it made the animated animal a part of its logo. It credits the duck with boosting Aflac’s brand recognition from 11% when the animal debuted to 94% by 2014. But it’s not always been smooth swimming for the duck. Aflac was forced to find a new voice for the character in 2011 after it let go of comedian Gilbert Gottfried in 2011 in the wake of insensitive tweets he made after an earthquake in Japan. (Even then-Ad Age reporter Rupal Parekh participated in a tryout before the gig went to a Minnesota radio station sales manager.)
Key stat: The duck made its international debut in 2003 when he waddled into Japan.
Strength: That quack demands attention.
Weakness: Is slippery when wet.
In real life would most likely …
Be enjoying retirement in a Florida pond. 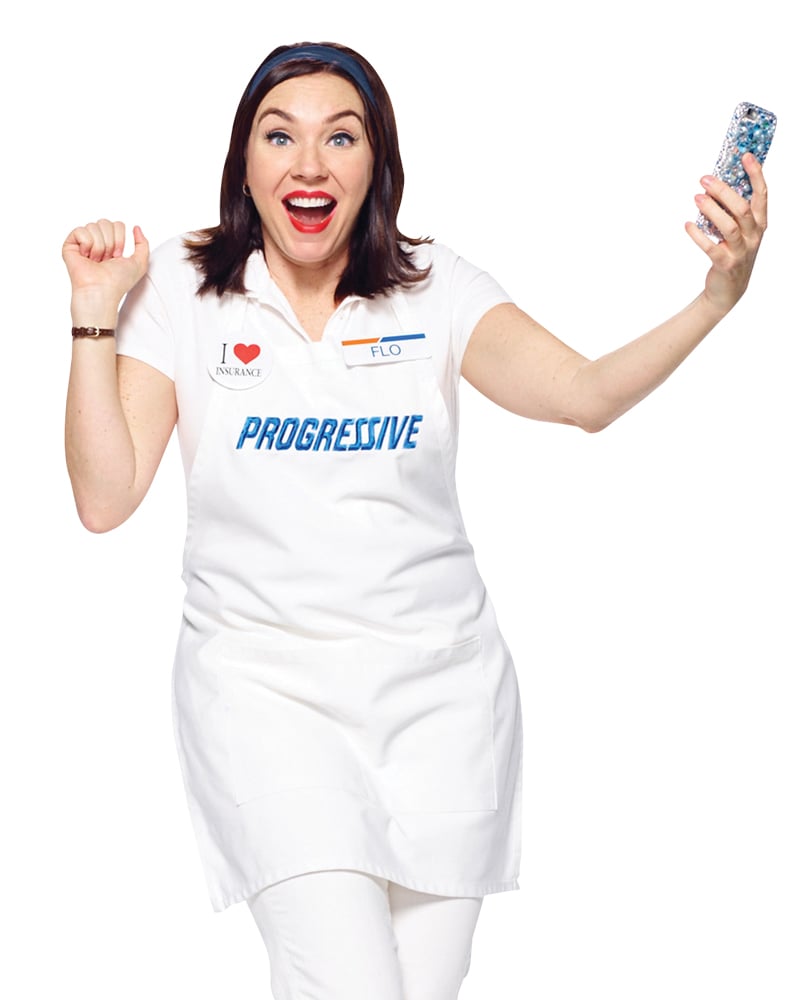 Bio: Played by actress Stephanie Courtney, Flo originally debuted as a cashier character who was confined to the insurer’s fictional “superstore”—an ad device meant to make an intangible service tangible. But as Flo’s star rose she became more versatile. With her trademark red lipstick and retro eyeliner, she’s done everything from appearing in animated form with “Addams Family” characters to showing up in the “ModNation Racers” video game. “As long as we keep her fresh and relevant, which we are really doing, as is showing in the results … she could go on for a long, long time,” Charney told Ad Age in 2013. (He was right.)
Key stat: Flo has 68,500 Twitter followers.
Strength: Has staying power.
Weakness: A little bit too perky?
In real life would most likely …
Be a professional cheerleader.

Bio: Actor J.K. Simmons originated the role of the fictitious professor, who is based at a university modeled after a real Farmers employee training program. His early lessons showcased over-the-top insurance claim situations; in more recent years, the campaign has evolved to Farmers “We Know From Experience,” which spotlights true but hard-to-believe claims from actual customers. Burke has appeared in more than 65 ads for Farmers Insurance.
Strength: Snappy dresser played by an award-winning actor.
Weakness: Does Simmons have time to keep filming all these ads amid his bustling acting career?
In real life would most likely …
Be your favorite college professor. 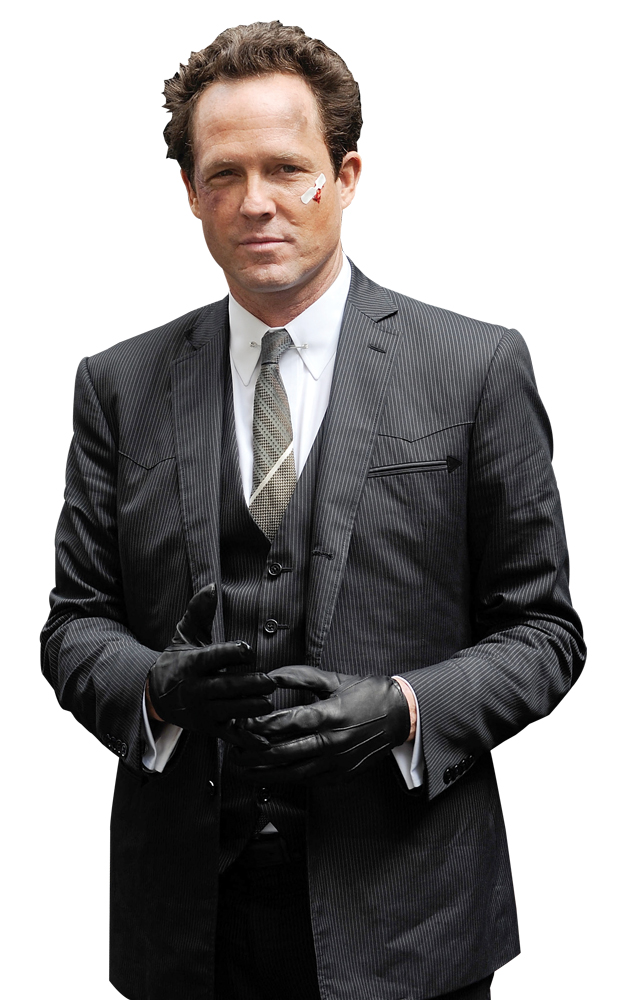 Bio: More than a decade ago, Allstate was losing share to competitors like Geico and Progressive, which both had buzzy spokescharacters. The insurer needed “a loud thunderclap to tell people that we cared about them,” Lisa Cochrane, formerly senior VP of marketing at Allstate, said in 2015. The brand certainly got one in Mayhem, the mischief-prone, destruction-wreaking character played by actor Dean Winters. Mayhem commanded consumer attention, and proved a nice counterbalance to Allstate’s more serious marketing done by longtime spokesman Dennis Haysbert.
Key stat: Character has nearly 120,000 followers on Twitter, where he has sent more than 1,510 tweets.
Strength: Always open to trying out the latest trends.
Weakness: Destroys everything.
In real life would most likely …
Be an unsuccessful stunt double. 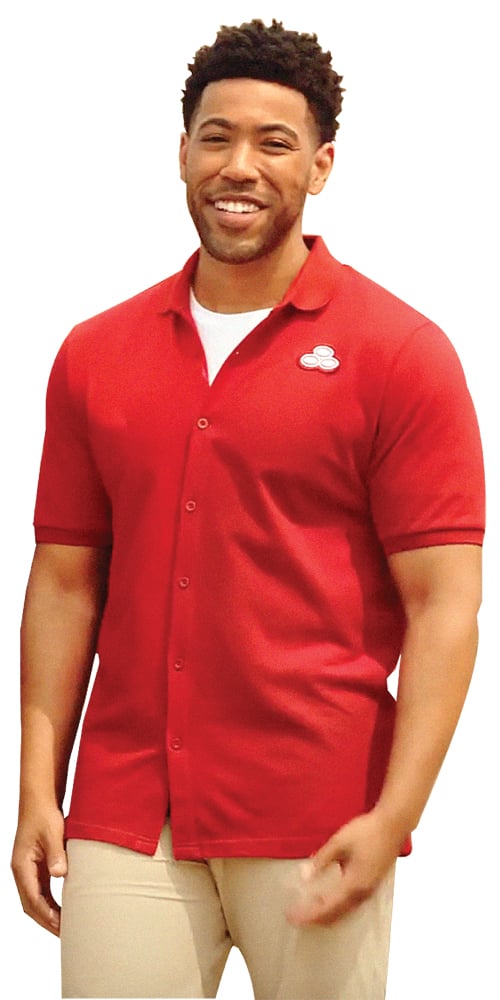 Bio: Jake began as a real State Farm salesman more than a decade ago, appearing as a khaki-wearing salesman in a memorable spot in which a wife thinks her husband is cheating on her with a late-night phone call. He was recast by actor Kevin Mimms in 2020 when State Farm made its Super Bowl debut with a pregame spot from new agency The Marketing Arm. The new Jake from State Farm has emerged as a mainstay in the insurer’s marketing, often appearing in his red shirt beside brand ambassadors like Chris Paul and Patrick Mahomes.
Key stat: Jake has drawn 150,000 likes on his TikTok videos.
Strength: Has become a meme/social media sensation.
Weakness: A little too friendly with Aaron Rodgers.
In real life would most likely…
Quit his insurance job to sell NFTs. 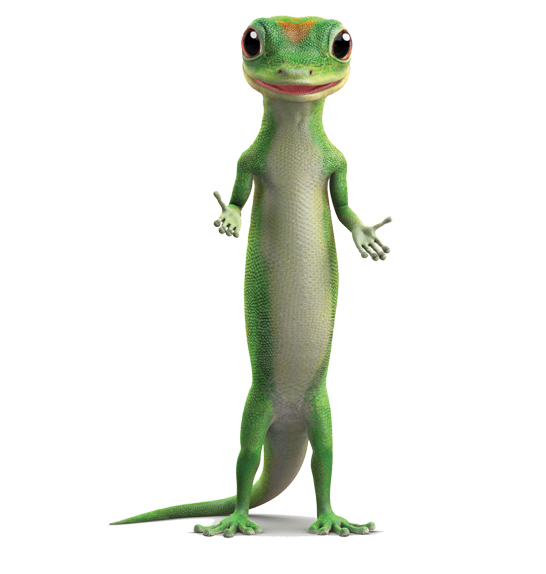 Bio: Originally conceived as a sketch on the back of a napkin during a client-agency meeting, the gecko was born during a Screen Actors Guild strike—so having an animated star without contract demands was not the worst thing in the world. It also gave Geico a creative device to keep people’s attention as it spreads a very simple message that “15 minutes can save you 15% or more on car insurance.” What Geico proved is that insurance advertising can be fun, even ridiculously silly—a concept that others have followed.
Key stat: The average gecko lives up to 20 years (but Geico’s lizard is still going strong at 23).
Strength: That British accent exudes a certain level of sophistication (for a lizard).
Weakness: Could easily be squashed by the camel in Geico’s famous “hump day” ads.
In real life would most likely …
Be a top attraction at the San Diego Zoo.

Americans Are Interested in AR, VR, and the Metaverse

A study conducted on behalf of Protocol by the Harris Poll found that while most U.S. adults have not used augmented reality or virtual reality technology, a notable portion are interested in trying AR...

Overview The Harris Poll is seeking a Chief of Staff to work with central operations and administration, commercial teams, and C-level executives to advance initiatives at accelerating growth. Reporting to the CEO, the Chief of Staff is...

By: Caitlin Owens | Axios | Jan 12, 2022 More than half of Americans say that it's more important to protect the health and safety of teachers and students by moving to remote learning to...

A recent survey conducted by The Harris Poll on behalf of Fast Company finds that most parents see value in obtaining post-high school education, but some have not started to save for their children's...

By: Ed Silverman | STAT News | Dec 28, 2021 Just before regulators authorized use of a widely publicized Covid-19 pill from Pfizer, only half of Americans were aware the treatment could prevent hospitalization or...
Load more