With COVID-19 cases continuing to rise in the majority of states, Americans are getting fed up with the country’s inability to get the crisis under control.

“The public has turned into autumn pessimists by watching the cases rise over the past month,” says John Gerzema, CEO of The Harris Poll, the long-running public opinion survey. “What’s driving their entrenchment is a feeling that it’s April in July.”

The majority of Americans (56%) expect another shutdown in their state, according to the most recent wave of the Harris Poll COVID-19 tracking survey, which has monitored public sentiment regarding the pandemic since early March.

Despite the fact that there has never been a federally mandated stay-at-home order, more than two in five Americans (43%) now think there will eventually be a national lockdown. About a third of the population (32%) thinks there will be a shutdown in their community. Only 20% of Americans do not believe there will be any form of future lockdown.

The Harris Poll tracker demonstrates that Americans have come to view lockdowns as a necessary evil. In a previous survey two weeks ago, a whopping eight in 10 Americans (80%) said a shutdown was an effective way to curb the spread of the virus.

Americans want to see governors and mayors take responsibility amid what is seen as a lack of federal leadership. In the most recent survey, three-quarters of Americans (75%) say that if the federal government does not issue a national stay-at-home order, their governor should issue a statewide shutdown. This belief is held by a solid majority regardless of political party (86% Democrats vs. 63% Republicans) and across all age groups (83% seniors vs. 68% Gen Z/Millennials).

And what if their governor does not issue a lockdown order? Over six in 10 Americans (63%) would then like to see their mayor take the reins and issue such a mandate.

Fear is driving a feeling of helplessness, says Gerzema, who notes that 80% of Americans anticipate a second wave of COVID-19, even before we are out of the first wave. More than four in 10 respondents (43%) now say the current stage of the pandemic is just the beginning and the greatest challenge is still in front of us.

As illustrated in the chart below, “this week we saw a fear in ventilator shortages tick up five points, a fear of returning to public activity is up six points, and a fear of dying ratchet up seven points,” says Gerzema. “Notice how these also spiked on April 5th when New York City was under siege.” 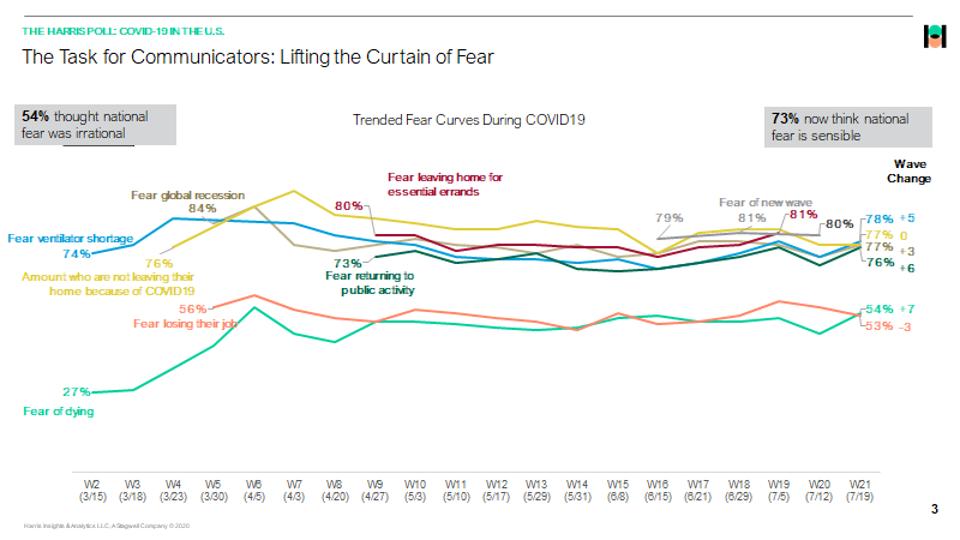 As it becomes painfully obvious that the United States is in real trouble with this pandemic, more U.S. residents are realizing the importance of complying with basic COVID-19 restrictions. Asked what they would be willing to do in exchange for a relatively short lockdown that ended within one month, 86% of Americans say they will follow social distancing guidelines and wear a face mask in public. “Interestingly, support for wearing face masks in public is up to 68% from 54% just since late March,” says Gerzema.

Gerzema sees Americans adjusting their expectations for the near future. “I think Americans are writing off this year,” he says, pointing out that six out of ten survey respondents (61%) expect to be working from home this fall and two-thirds (66%) expect their kids will be taking online classes from home.

Methodology: The latest wave of the COVID-19 tracking survey was conducted online within the U.S. by The Harris Poll from July 17 to 19 among a nationally representative sample of 1,970 U.S. adults.

Read the full article at Forbes.