The economic damage of COVID-19 has surely been taking its toll on working Americans. Over 20 million Americans are out of work due to the pandemic. Twenty percent of small businesses, where 48% of Americans are employed, are temporarily closed, and over 100,000 have closed permanently. The future is fraught with economic uncertainty, with one of the byproducts being “retirement uncertainty.” The pandemic and its economic impact are dramatically disrupting the retirement plans and preparations of Americans.

How much? A just-released landmark study finds that 39% of American workers, some 68 million in all, are changing their retirement timing. The research is a comprehensive five-generation retirement study conducted by Edward Jones and Age Wave (our research organization), including a survey of 9,000 North Americans conducted by The Harris Poll. The study was timed to incorporate a close look at how the pandemic is impacting people’s lives and retirements.

Three-quarters of those who are rethinking their retirement timing are, no surprise, planning to postpone retirement, by over 3 years on average. Their reasons are financial: they’ve had to dip into their savings, their retirement funds have lost investment value, and they have greater uncertainty about how much money they will need in retirement. The study also found significant regional differences in workers’ plans to retire later: that’s the case for 32% of respondents in the Dallas area and 30% in Los Angeles, but only 21% in Portland, Oregon, and 22% in Kansas City. 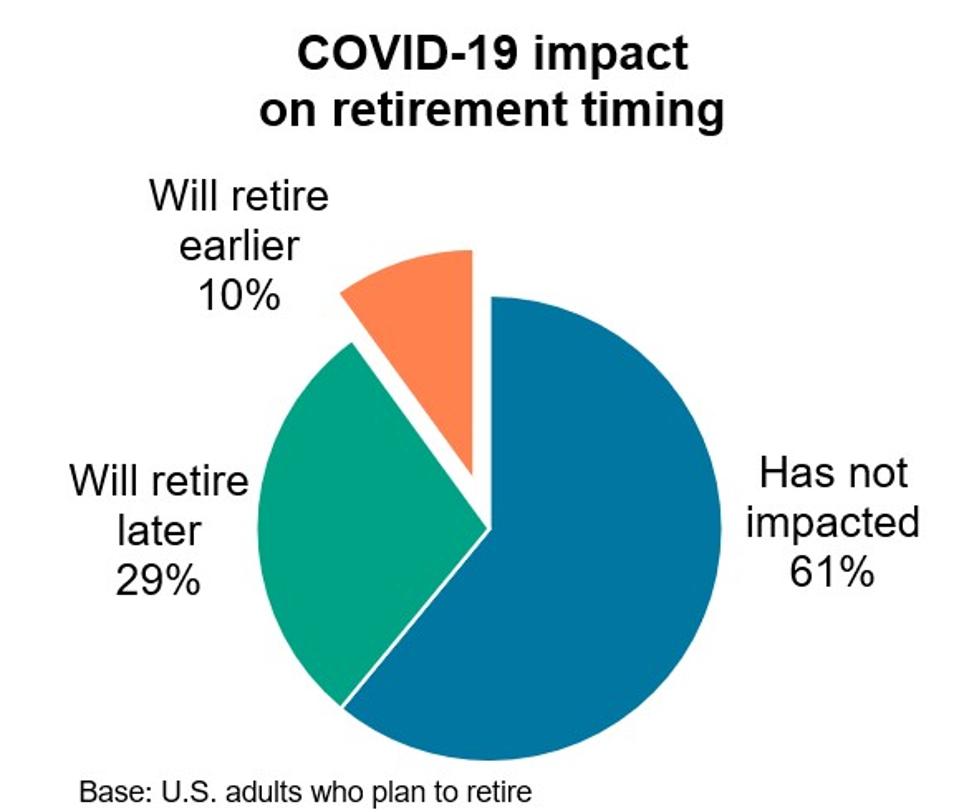 The others who are changing their retirement timing, some 10% of the working population, are planning on retiring earlier. They say they want to do other things more important to them, they are worried about the health risks of continuing to work, or the pandemic has made them realize just how much they’re looking forward to the freedom of retirement. The pandemic has thrown into sharp relief what matters most in people’s lives, and the slowdown has given many a taste of retirement.

The study found that COVID-19 has disrupted retirement preparations of American workers at large, not just those who are rethinking the timing. The majority of working adults were not on track with their retirement savings to begin with, and COVID-19 has thrown them even farther off course. They are feeling less confident now about how much they are saving for retirement (only 46% confident today compared to 58% prior to the pandemic), and 20 million Americans have stopped making regular retirement savings contributions during the pandemic.

One fourth of Americans say the pandemic has significantly reduced their financial security, and interestingly, the greatest impact is on younger generations. Nearly one-third of Gen Z and Millennials characterize the impact as very or extremely negative, while only 16% of Boomers and 6% of the Silent Gen say they are affected to that degree. Older Americans, especially those already retired, remain more financially secure because they rely less on income from employment, and they are more insulated from financial shocks by the safety nets of Social Security and Medicare benefits. Most retirees also have the security of home equity – 78% own their homes, with 60% of those mortgage-free. And older Americans are more likely to be receiving guaranteed defined-benefit pensions from their former employers.

Postponing Retirement Can Be Smart

If you’re among those thinking of retiring later, you’re in good company. The average age at which Americans currently retire has risen to 65, a level not seen in 50 years. For sound demographic reasons, starting with increased longevity, the “full retirement age” for Social Security benefits is being calibrated upwards. People recognize that they need to work longer to fund longer retirements. The additional average life expectancy of Americans at age 65 is 18 years for men and over 20 years for women, and increasing numbers live well beyond that average.

Working in Retirement Can Be Even Smarter

As we mentioned in a previous post, working after retiring, typically part time, is becoming the new normal. The labor force participation rate of Americans age 65 and older has risen to 20%, again higher than we’ve seen in 50 years, and age 65+ is the fastest growing segment of the workforce. Rand Corporation research finds that nearly 40% of workers 65 and older had stopped working for a while and then “unretired.”

As we discuss in depth in our new book What Retirees Want, working in retirement is good for you on many fronts. The income is, of course, welcome – and essential for many. But the number one reason people say they’ve chosen to work in retirement is to stay mentally active and sharp. And ranking right up there with the money are staying physically active and staying socially connected. Those are things that also help people stay healthy. As one working retiree suggested to us, “If you don’t work, you get old faster.”

The majority of retirees tell us they enjoy their work in retirement more than work in their earlier careers. They have the freedom to work differently – part-time or seasonally or on a project basis. Many change occupations to something they are passionate about, or were passionate about early in their careers. Some work through organizations like Encore.org to put their experience and skills to work for the greater good. Many work for themselves, and some even get bitten by the entrepreneurial bug and start new businesses. There are best-selling books designed to help aging Boomers craft a new career, such as Kerry Hannon’s Never Too Old to Get Rich.

Compared to their pre-retirement work, retirees find their retirement work more flexible and fun, and less stressful and boring. The majority have told us, in both good economic times and bad, that they work in retirement because they want to, rather than because they have to.

We should also note that having more older workers can be good for employers and good for the economy. Working retirees and other older workers bring not just experience, but social skills and empathy, perspective and problem-solving ability, and often a motivation to give back, including by training and mentoring younger colleagues. In the years ahead, with the advancing Boomer retirement wave, some employers, particularly in medicine, law enforcement, and engineering, will find themselves struggling with the “brain drain.” They can mitigate the effects by encouraging Boomers to work longer, work in retirement, and in so doing, thoughtfully and purposefully transfer their experience and institutional knowledge.

Read the full article at Forbes.